RMC Government Accounts Manager Dave Perez takes notice and acts on what he sees. Dave noticed the growing Ray Morgan employee population including professionals from various cultures, the increasing stressors in the larger business world, and the negative health effects of tension, and took action.

“We can be encouraging, show kindness, and promote good old common courtesy.”

To encourage all these virtues, Dave created the “Nice Guy” program, asking employees to nominate others who display an extraordinary level of kindness and service. Those nominated are awarded Wings, signifying angel-like engagement.

“I wanted to take the time to recommend for the Nice Guy award the two of you! Both of you should have been the first to receive such an award but it has been overlooked. I am sure the rest of the RMC team would agree that you guys are terrific in everything you do. I am combining my recommendation because you both have very similar attributes:Very Kind, Patient, Helpful, Supportive, Giving, and Hard Working”

And two of the nicest people I know!!!!

Please join the Nice Guy Team and receive your wings!

Sadly Dave wasn’t pictured but below is Alesha: 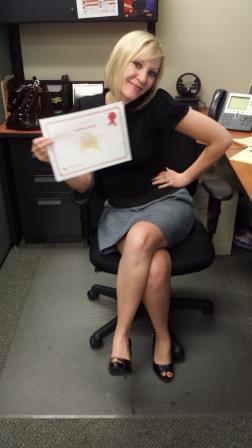 For my first ever Nice Guy nomination I would like to propose Noele Klepper. Why? Simply, Noele gets it. She recognizes the branch’s need for information to satisfy customer requirements, replies quickly and does so professionally. What makes the interaction special is that Noele is POSITIVE! Whether through email or over the phone her positive attitude and smile come through. Whether in Roseville or in the Bay Area, I only hear great things about everyone’s interaction with Noele. If I was building a team Noele would be a first round draft pick!